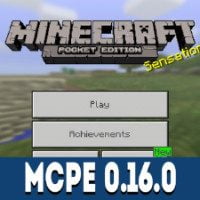 Mojang Studios has been working hard on bringing the next major update for their sandbox survival. This time is called Boss Update since it features one of the most challenging creatures there’ve been.

Minecraft PE 0.16.0 also has a henchman to protect the lair of that boss. Moreover, there is a new block set used to build some of the fantastic underwater buildings.

MCPE 0.16.0 has guardians. They spawn exclusively underwater and only in the Temple: that’s their nest. Besides, guardians have one of the quirkiest models ever.

They represent a one-eyed creature with a long tail that shoots lasers. Furthermore, many users find them complicated to battle with.

Guardians are like a duck to water — they move rapidly and windingly, attack swiftly but painfully, and deal with intruders swimmingly in Minecraft PE 0.16.0.

Therefore you should be aware of their superior power. Guardians drop prismarine crystals and sometimes raw fish.

All of these pesky and irritating protectors try to hide their master, the Elder Guardian. It is larger in MCPE 0.16.0 compared to its followers.

Moreover, the Elder Guardian is gigantic on health, denoting you’ll spend a while killing it. It’s also the main and only reason why you have Mining Fatigue.

Once the Guardian is slain, players no longer receive this meddlesome effect in Minecraft PE 0.16.0. It means you can now mine and collect all blocks around you.

Additionally, MCPE 0.16.0 has a few marvelous blocks to build with. They are prismarine blocks, sea lanterns, wet sponges, and beacons.

You can craft them all with no problem at all. Wet sponges generate naturally within the Underwater Temple walls.

Other blocks have their recipes meaning you can get them in Creative.