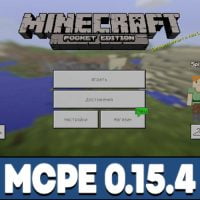 Download Minecraft 0.15.4 for Android: play with animal riding mechanics, new mobs, and a set of skins!

The Mojang development team has finally decided to release a new Minecraft Pocket Edition 0.15.4 update. In it, they tried to fill the game with even more content and fix bugs.

Minecraft PE 0.15.4 has added a completely new system of interaction with mobs to the game. Now the player has a chance to ride some of them. Thus, the player can ride a horse or a pig. Additionally, the horse can be equipped with armor, while the chest is only a mule and a donkey.

To saddle a horse in Minecraft PE 0.15.4, you only need patience and a saddle to control the ride. Just try to get on the horse over and over again until you succeed.

You don’t have to mess around for a long time to saddle a pig because you only need to take a fishing rod with carrots and a saddle with you. The carrot rod is needed to control the direction of the pig’s movement.

It is worth noting that in MCPE 0.15.4, there are as many as five types of horses:

In Minecraft PE 0.15.4, the developers also added the remaining blocks needed to build various mechanisms. For example, the player can now use the piston to move various blocks using the redstone signal. An observer has also appeared in the game. It detects movement and gives a redstone signal at the same time.