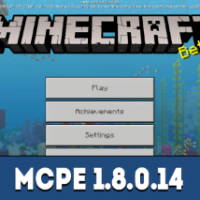 This release of the Village & Pillage update features a variety of exciting things. Pandas are one of them. These massive heavy creatures live in the bamboo forests and nowhere else.

Generally, they do nothing but lounge around and mind their business. However, pandas also have their personalities in MCPE 1.8.0.14.

There are aggressive pandas. They attack intruders if they dare to attack the family. Lazy ones are considered the slowliest mob in the game.

Playful Chinese bears can roll over and simply have some fun, while weak ones will sneeze more often than others in Minecraft PE 1.8.0.14.

All these types and others not mentioned love eating. When it comes to tastes, they adore bamboo and sometimes cakes.

Mojang Studios also introduced new dyes into the game. Although the number of possible colors did not change, some of the tones changed their owners.

For instance, you no longer use ink sack, cocoa beans, lapis lazuli, and bone meals as stains. Instead, users have to craft blue, brown, white, and black shades in MCPE 1.8.0.14.

On the other hand, there is a crossbow. It’s a more robust and slowlier version of a bow. You can make it using strings, sticks, and an iron ingot.

It has three various enchantments and capable of shooting fireworks.

Obviously, Minecraft PE 1.8.0.14 features new achievements to score. They are mostly related to pandas and bamboo.

Mapmakers will definitely be satisfied with the /function command. It allows launching modified add-on features.

Furthermore, there is another cunning pun on the main menu — a splash «Pandamonium.» By the way, users can put any fireworks on their offhand in MCPE 1.8.0.14.

As you can see, there’s a lot that’s been added to the game.