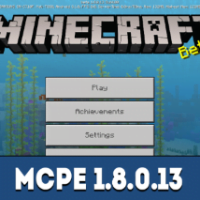 Village & Pillage update is to add a tremendous amount of new features. One of them is pandas. These bulky but cute creatures live only in bamboo forests.

However, this biome is usually known for being laggy and inconvenient in many ways. Minecraft PE 1.8.0.13 fixes this troublesome issue and brings hope to the white-and-black mobs.

Players no longer suffer rough and unpredictable gameplay due to the bamboo in MCPE 1.8.0.13.

Although a large amount of this vegetation will eventually make the game slowlier, most players will take it with no problems.

A few blocks changed their behavior as well, which must be mentioned. For instance, there is a new recipe for an undyed shulker box in Minecraft PE 1.8.0.13.

Recently, users had to use any type of dyes to make the prettier version of this blocky backpack. Moreover, an empty mob spawner no longer emits particles when there’s no mob inside of it.

Generally, MCPE 1.8.0.13 features a lot of Marketplace fixes. Several of its maps had trouble with some specific items.

The /gamerule command has been changed a bit. It turns out only Operators are now able to use it. Therefore ordinary users won’t be able to modify the world’s options.

As a matter of fact, the /scoreboard order works correctly now. It had issues previously, which have luckily been fixed.

This release’s other excellent addition is the introduction of crossbows. This enormous weapon, when compared to a bow, deals more damage but slowlier to shoot.

Nevertheless, MCPE 1.8.0.13 users can even enchant it to make it even more robust. Besides, it uses the same arrows as bows do.

As you can see, this update has a lot to offer.