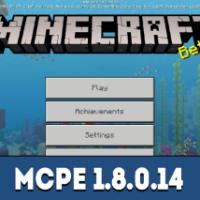 This version’s one of the most exciting things is a crossbow. It’s a perfect addition to a bow and arrows. However, a crossbow works a bit differently in Minecraft PE 1.8.0.10.

It turns out bows are faster but weaker. On the other hand, crossbows are longer to recharge but deal a lot of damage.

Besides, MCPE 1.8.0.10 crossbows also have several enchantments. They are Multishot, Quick Charge, and Piercing.

When used, the Multishot enchantment gives a crossbow the ability to shot three arrows simultaneously.

Therefore you can kill three rabbits or zombies with just one arrow used in Minecraft PE 1.8.0.10. Crossbows or books like this are super rare.

The Quick Charge increases the reload speed. Combining with the previous magic power, you can create something truly unstoppable.

There’s also Piercing. It means once shot, an arrow can damage two or three mobs at once. As a matter of fact, you can use your crossbow to fire fireworks in MCPE 1.8.0.10.

Adorable and beloved pandas also got new sounds. They are now cuter than ever before. On the other hand, packed ice can be obtained using 9 pieces of ordinary ice altogether.

By the way, brand new scaffolding received some additional sounds. Moreover, it burns in lava in Minecraft PE 1.8.0.10.

Players can even sneak on those blocks if there is no scaffolding block underneath it. Interestingly enough, pandas can now be fed bare hands.