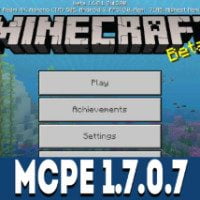 Minecraft PE 1.7.0.7 users have received a plethora of minor changes. They have significantly improved the gameplay of this sandbox survival.

This update is about technical stability and optimization in the first place. First off, more than twenty crash outcomes have been found and solved in MCPE 1.7.0.7.

Moreover, there is no more a crash using 128x resource packs on Nintendo Switch. Such a big resolution often has resulted in unwelcome quits.

On the other hand, the problem with Microsoft Account sign-in has been repaired as well. Many users could connect to Microsoft servers.

However, there’s always more: another outstanding server. The Hive is an excellent example of a welcome and friendly online community.

Anyone can join this public server and stay positive playing numerous mini-games, chatting with hundreds of players, or merely admiring the server’s lobby in MCPE 1.7.0.7.

On the other hand, all multiplayer sessions now support tips when typing @ in the chat. The player list will appear, helping you quickly navigate between hundreds of users.

Minecraft PE 1.7.0.7 adds another game rule users can use for their own purposes. /gamerule commandblocksenabled allows fellow users to toggle the command blocks functionality on and off.

Evidently, you can turn it off and on in the world creation settings, but now it’s also regulated as a game rule.

It will be advantageous in those specific cases when something goes wrong with your command block, and you can’t stop it in MCPE 1.7.0.7.