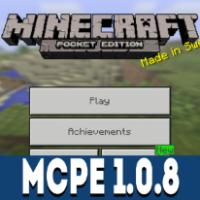 Download Minecraft PE 1.6.0.8 Update Aquatic for free on Android: a lot of bug fixes, numerous enhancements, and phantoms with a potion of slow falling.

Minecraft PE 1.6.0.8 features a few significant changes and always important advancements in optimization. Developers are working hard to make their game available on every platform and device possible.

However, there are more building possibilities, as well. For instance, a barrier block has arrived. You can use this to limit someone’s movements or trick your friends.

Nonetheless, MCPE 1.6.0.8 users can get it only via the /give command since it’s not even in the Creative inventory. Moreover, barriers differ from other ordinary blocks.

It seems it’s impossible to break and crack it. No matter how hard one tries, you’ll never be able to even shed a fissure on it.

It blocks ways one shouldn’t even try visiting. It comes a handy to the map builders whose creations are so big and have many ways to go, but they wouldn’t want users to go there.

You can’t either see them or destroy them — that makes it perfect for those cases in MCPE 1.6.0.8. On the other hand, it also denotes you cannot get barriers in Survival.

Furthermore, there’s a way to witness them: you must hold one in your hands, so it appears as a traffic ban sign.

Mojang Studios also repaired some of the most troublesome aspects of this sandbox survival. For instance, some achievements can once again be obtained in Minecraft PE 1.6.0.8.

Besides, there is a new status effect called Slow Falling: you get from a potion made of the phantom membrane.