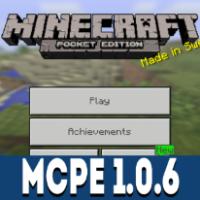 Mojang Studios is introducing another dangerous creature that will hunt sleepless players down. Phantoms have appeared in Minecraft PE 1.6.0.6.

Monsters of Night Skies were announced at Minecon Earth 2017, along with three other creatures. Users had to vote for one of them to join the game’s bestiary.

Die was cast, and phantoms have officially become the first hostile flying mob, except for the Ender Dragon. They spawn at night but not always in MCPE 1.6.0.6.

It turns out developers introduced another exquisite system called Insomnia. This parameter counts days without sleep and summons phantoms if it’s more than three in Minecraft PE 1.6.0.6.

Therefore you should sleep at least once in three days to avoid unplanned meetings with these hawkish vultures.

Monsters of Night Skies are somewhat unique when it comes to attacking strategy. First of all, they usually spawn in groups from two to five and more species.

You must realize the more night you skip in MCPE 1.6.0.6, the more phantoms will appear to pursue going to bed. Still, there’s a way to fight them off.

Craft yourself a bow and a few arrows since phantoms are flying beasts.

Now, try learning their pouncing plan: usually, they are high above you, but when you pay no attention, they swoop down and claw you fiercely.

This becomes deadly when several hungry and exasperated phantoms try to tackle you down in Minecraft PE 1.6.0.6.

Phantoms drop membranes one can brew a potion from. Slow Falling’s tincture allows players to feel like a chicken in the air: slowly and gradually falling down.

It will save you from inevitable death, but it might be inconvenient once you land in MCPE 1.6.0.6. After all, every step down will be longer than it usually is.