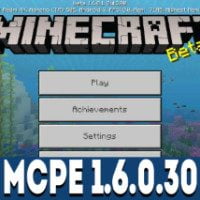 Mojang Studios are finishing to work on this part of the Update Aquatic, releasing yet another small bug fixing overhaul. Minecraft PE 1.6.0.30 features new items and mobs as well as commands.

Several utterly significant changes have happened during the development of this update. First of all, TNT no longer damages players and mobs when it’s exploded underwater.

It did not destroy surrounding blocks prior but did hurt the living beings around it. MCPE 1.6.0.30 solves this inequality.

On the other hand, Book and Quill, an item one uses to write poems, notes, and stuff, now supports [ and ] keys for switching pages. Users can adjust it in Control Settings if needed.

As a matter of fact, one longer shifts its game mode when joining one world after another one with a different mode.

For example, Minecraft PE 1.6.0.30 players will not join Survival world in Creative despite previously hanging around in Creative.

It was a big problem for many who wanted to get all the achievements: you cannot get them in Creative due to the balance disruption.

MCPE 1.6.0.30 also features new public servers on Nintendo Switch. Therefore, many people will be able to play with their friends on their way back home, work, or shopping.

You can find them on the Server tab once you press the Play button on the main menu.

Numerous hosts with various mini-games and unique gameplay have perched atop the page.

Notwithstanding the statement, the game’s sensitivity has been corrected, and Minecraft PE 1.6.0.30 now works perfectly on all devices and platforms.