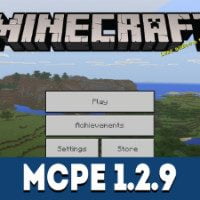 Developers from Sweden added a few new blocks like banners. You can craft a whole variety of these, and you are not limited at all.

It means you are free to make American, Canadian, French, Polish, and hundreds of other banners in Minecraft PE 1.2.9. All you need to collect is dyes and wool.

You make banners out of wool and sticks and then use dyes to added stripes, rounds, squares, gradients, and much more.

By the way, all the End Cities now have banners as well. They are obviously colored purple and have ender symbolics in MCPE 1.2.9.

Notwithstanding, Minecraft PE 1.2.9 main and the most exciting one is related to multiplayer.

It turns out users from different platforms, like iOS, Android, and Xbox One with Windows 10, can now play on the same servers.

You should no longer worry about the differences between them since Cross-Platform gameplay has been introduced by devs in MCPE 1.2.9.

Armor stands are also a thing in the Better Together update. They can hold one set of your favorite armor if needed. Use sticks and stone slabs to make them.

A Book and Quill is a brand-new tool in Minecraft PE 1.2.9. Users possessing it may utilize it to write little notes, task lists, and even stories or novels.

On the other hand, fireworks can make things a bit less boring, funnier, and more cheerful. Besides, gunpowder has more applications than ever.

Craft a few sheets of paper and some gunpowder to make a bunch of bangers. Don’t forget about the dyes since it won’t be as vivid as with them.

As a matter of fact, Minecraft PE 1.2.9 features a new pet. Parrots have become the first and the only tamable flying creature. Since they love seeds, feed them some to befriend parrots.

However, don’t try feeding them chocolate-full cookies because it causes them pain, and they’ll eventually die.

Generally, there are dozens of features in MCPE 1.2.9, as you can witness.