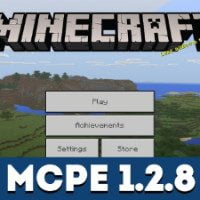 Download Minecraft PE 1.2.8 Better Together for free on Android: hundreds of bug fixes, armor stands, and parrots are now in the game.

Mojang Studios once again released another small but vital update for its beloved sandbox survival game. This time, more technical issues have been fixed than ever before.

For instance, beacon light beams henceforth change colors if stained glass is placed atop in Minecraft PE 1.2.8. However, shades do not mix temporarily but will do it in the future, according to the devs.

An ice block changed its textures: it’s transparent now. It means you can look through it. It’s not a big deal, but it’s a game-changer for many.

MCPE 1.2.8 also introduced the observer’s new texture. It’s tidier now and even blinks every time it sends a Redstone signal.

Moreover, this block can detect many block changes simultaneously, and its signal is now farther and more resilient.

There is a variety of new blocks in Minecraft PE 1.2.8 you should know about since they might change your life and gameplay. For example, a structure block is the command block’s cousin.

It has nearly the same purpose: it’s used in Redstone contraptions in MCPE 1.2.8. Notwithstanding, a structure block can copy and paste whole areas with a few button presses.

It’s a significant part of building something ginormous. Tricky and sometimes lazy builders have had the problem with it for a long time.

Fireworks joined the game in this overhaul. You can craft quite a lot of various bangers. For instance, there’s one with a creeper face in Minecraft PE 1.2.8.

On the other hand, music discs can now obtainable as well. You need these to play a song using a Jukebox, another brand-new block.

Numerous records can be found in chests throughout the world and after creeper’s death by the skeleton’s arrow.