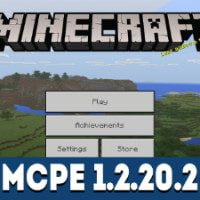 Mojang Studios has decided to focus more on the technical aspect of the game this time. However, there are still various brand new features you are going to like about Minecraft PE 1.2.20.2.

This sophisticated and exquisite mob is yet to show its potential. It’s still in beta and lacks many highlights so far. Notwithstanding, they’ve got something to offer.

First of all, dolphins are neutral mobs that spawn everywhere in the updated oceans, except for the frozen ones in MCPE 1.2.20.2.

Since they are neutral, they won’t attack you unless you start swinging your sword here and there. This beast is also considered to be the fastest swimming mob ever.

By the way, Heart of the Sea and Nautilus shells are another excellent addition to the game’s vast and ambiguous oceans.

They both don’t have any value yet, but their textures now match Java Edition. Moreover, you can put up to four sea pickles in one block in MCPE 1.2.20.2.

The world’s generation has changed a little: underwater ruins appear all throughout the oceans. You can find multiple chests yonder.

This update has become even more complicated than it could become: Better Together now has some of the Update Aquatic features with some parts of the Chemistry Update, which is part of Education Edition.

Minecraft PE 1.2.20.2 has glow sticks and Material Reducer to offer. Furthermore, the lab table and Compound Creator is now a thing as well.

Nevertheless, you must turn on Experimental Gameplay in your world’s Settings, so you can get all the chemical stuff.