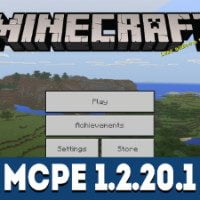 Developers are already working on the next major update. It will feature completely new oceans, new water physics, and even dolphins. However, we have only a bit of it in Minecraft PE 1.2.20.1.

Heart of the Sea is one of the rarest things in the game so far and one of the most precious. This mysterious item can be found only in the buried treasure chests.

On the other hand, we have Nautilus shells. You are supposed to get those when fighting a new mob, but it doesn’t drop yet. It has no use, as well.

Both the Heart and the Shell are planned to be combined to get the Conduit in Minecraft PE 1.2.20.1.

There are even brand-new marine creatures in this sandbox survival game. For instance, dolphins spawn in any not frozen ocean. That makes them quite usual in the updated waters.

Dolphins are neutral mobs, which means they won’t attack you unless you do in MCPE 1.2.20.1. They are also rapid: perhaps, the fastest creatures underwater.

Upcoming Update Aquatic introduces new sunken ruins as a part of Better Together. These buildings generate in lukewarm, cold, and frozen ponds.

Obviously, they come in different shapes, forms, and sizes. The majority of them contain a chest in Minecraft PE 1.2.20.1, which makes them a desirable destination.

Mojang Studios also added some features of the Chemistry Update for the Education Edition. However, you can play with them only with the Experimental Gameplay on.

Here’s a list of what you can find there: