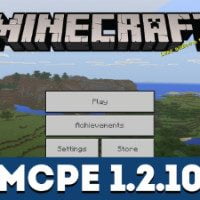 Mojang Studios are almost done working on the Better Together update since there are only technical enhancements lately.

For instance, chat messages can now be muted in Minecraft PE 1.2.10. Moreover, a bunch of specific menus has been overhauled. They look more appropriate henceforth.

First off, you need blaze powder for brewing. It serves as fuel thenceforth. Luckily, it works a bit differently compared to the furnace fuel.

Blaze powder wastes only while you are brewing something in MCPE 1.2.10. It means you can keep it for a long time. On the other hand, picked up items are animated in a hotbar as well.

As a matter of fact, users can now shoot and eat while driving a minecart. Previously, these actions were blocked for some reason.

Furthermore, ghast fireballs can lit up Nether portals in Minecraft PE 1.2.10. On the other hand, Woodland Mansions can generate with birch planks too.

Some players also complained Endermen, snowmen, and blazes did not take damage by lingering potions priorly. Mojang Studios promises to fix it.

There was another hilarious bug with mobs. Zombies, skeletons, creepers, and other beasts did not avoid cacti, lava, and fire, killing themselves.

MCPE 1.2.10 is to solve those pesky problems, bringing joy to all members of this sandbox survival.

Talking of which, we have parrots spawning in the jungles. What’s more ambitious is that you can actually tame them. Parrots will even help you by warning you of approaching foes.

Use seeds as a reward but never feed them cocoa beans or cookies. It’s venomous for their organism in Minecraft PE 1.2.10.

Parakeets can sometimes sit on your shoulder and have only four HP, so you should take good care of them.