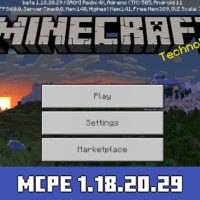 Download Minecraft PE 1.18.20.29 for android with a working Xbox Live: get froglight and sculk blocks, catch tadpoles, and appreciate the improved frog animation!

The developers of Mojang continue to refine the game world. The released version of Minecraft PE 1.18.20.29 introduces players to new mobs. It opens up additional features and access to unique blocks, improving the gameplay.

Amphibians still inhabit the swamp biomes of Minecraft 1.18.20.29. The animation of these mobs has changed and improved several times. They began to jump better and began to look more realistic in general.

In addition to frogs, there are tadpoles in the swamps. They swim only in water because they cannot be on land.

By the way, Steve can try to catch tadpoles with a bucket.

To get the froglight, you need to lure the frog with magma and wait. After some time, the amphibian will share a valuable block with the player.

There are also valuable blocks of the game world, sculk blocks. They emit unusual light and have several varieties.

One of the blocks reacts to sound waves, so it can be something like an acoustic trap. You can weaken the effect with the help of wool, it creates sound insulation.

The Mojang team has refined the gameplay in terms of damage. Now in Minecraft 1.18.20.29, it is calculated more accurately, and the amount of damage inflicted by some mobs has also changed. The damage from the dragon’s breath has become correct.

There was a refinement of Steve’s movements. In creative mode the player can climb and descend the stairs without stopping. By the way, if a player leaves the game while in lava, he will be in the same place when he returns to the world.