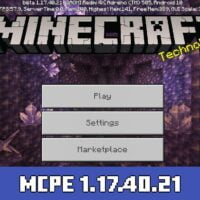 Download Minecraft 1.17.40.21 apk with a working Xbox Live: explore the new possibilities of the multi-noise world, use the spyglass for research.

The most significant innovation in the version is the appearance of improved generation. In Minecraft 1.17.40.21, the multi-noise world function has become available. This novelty intends to coolly transform all the surroundings of the map and make the cubic world even more interesting.

For example, this generation eliminates all problems and errors that could appear near biomes. Also, when forming a location, all irregularities will now be eliminated, creating a smooth transition from one biome to another.

Minecraft 1.17.40.21 has a unique location called a stony peak. The whole feature is that the biome is generated in the middle of the mountains. Small hills, canyons, rocks appear near the peaks.

All these structures perfectly complement the general landscape of the world, but at the same time make movement around the terrain rather problematic. The rocky peak has one indisputable plus – the unlimited amount of valuable resources in Minecraft 1.17.40.21.

Render Dragon is a graphics engine that improves absolutely all objects in Minecraft 1.17.40.21. Most of the changes are present in the appearance of biomes. But of course, NPCs were also affected. Even the most harmless mobs have got an improved texture, to say nothing of natural objects. And it’s all thanks to Render Dragon.

Minecraft 1.17.40.21 has some changes regarding generation below zero. Thus, now the height of the world has increased significantly and it has become more interesting to walk through the caves.