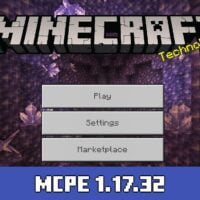 In the new Minecraft update 1.17.32, the developers from Mojang Studios have introduced even more content. For example, you can find a biome of rocky peaks, an updated graphics engine, and new items in the game. Thanks to all these changes in Caves & Cliffs Update, it will be possible to diversify the gameplay of the cube world.

The main feature of the entire Minecraft PE 1.17.32 update is introducing a new cube world generation system. Now the mountains are taller and more dangerous, and the caves are deeper and livelier. Among the changes, you can find several new types of caves and an increased height of the mountains.

However, with the advent of new chips, various bugs have also appeared. One of them was the snow-capped mountains in the middle of the jungle biome. Minecraft 1.17.32 has a unique territory called rocky peaks, which corrects this defect.

Also, in Minecraft Bedrock 1.17.32, the graphics engine of the game has been updated. Render Dragon is now used. With its help, the development team from Mojang Studios and various modders will be able to further improve and change the appearance of the game. However, for ordinary players, practically nothing new will appear.

A small item that is very easy to craft even in survival mode, but which will be useful for all those players who explore the world of Minecraft 1.17.32.

To create, you need to use 1 amethyst shard and 2 copper ingots. A spyglass will allow you to get a good look at what is 100 blocks away.

As previously mentioned, the stony peaks biome appeared in Minecraft 1.17.32. This biome has high mountains. However, instead of the usual snow, the player will see only stones and gravel here.