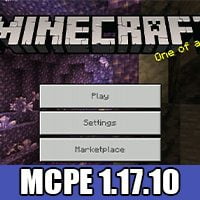 Download the full version of the Caves & Cliffs Minecraft 1.17.10 update for Android with a working Xbox Live and meet a completely new underworld!

Developers from Mojang Studios have released the Minecraft PE 1.17.10 Caves & Cliffs update. There are some interesting new features in this update. For example, a new material has appeared in the underworld that is not so easy to get – amethyst. Also, the developers have worked on fixing bugs.

In Minecraft PE 1.17.10, the player has the opportunity to follow what is happening far away, thanks to a new telescope. To craft this item, you must use two copper ingots and one amethyst shard.

The spyglass has a unique usage animation that is visible when playing in third-person mode. When used, a blue square appears with the zoomed-in view, which is similar to the effect of using a carved pumpkin.

In the inner layer, you can find blooming amethysts, buds, and amethyst blocks. These are often found when an amethyst geode blocks the passage. It is also worth noting that you can only mine amethyst with an iron, diamond, or netherite pickaxe.

Another interesting innovation in Minecraft 1.17.10 is candles. The candle is a new light source that can even be mounted on a cake. Four candles can be installed on one block at once. To craft this item, you must use a honeycomb and string. To get a honeycomb, you need to use scissors on the bee’s nest. But you have to be careful, as the bees will defend their home.