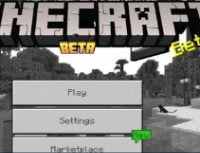 Download Minecraft PE 1.15.0.55 Nether Update for free on Android: several bug fixes, a lot of improvements, and much more in this beta-version.

Mojang has decided to update its game by making it entirely the same with Java Edition. Therefore there are a lot of changes related to deleting some features and adjusting already existing.

Minecraft PE 1.15.0.55 has also become enjoyable to play since the developers are continuing to enhance the game’s performance. Even the cheapest and weakest smartphones are compatible with the game now.

First of all, devs fixed terrible crashes since they were literally breaking the game. Players reported they lost their worlds after an unexpected error.

Luckily, it is no longer a thing in MCPE 1.15.0.55. By the way, ratings in Marketplace now appear correctly when scrolling. A wrong product’s representation could result in another crash.

On the other hand, Blue Wither Skull will once again destroy obsidian blocks. Earlier you could just lock one of the game’s most potent enemies in a cage.

A few animals have changed their behavior as well. For example, hostile mobs that love devouring turtle eggs will now seek out and destroy these tiny pieces of innocent life way faster.

Just a reminder: zombies, wolves, ocelots, skeletons are the main threat for the turtles’ lives in Minecraft PE 1.15.0.55.

Furthermore, wolves that fed with meat now once again restore their heart points.

Meanwhile, Cured Zombie Villagers inherit their XP the way they should. Priorly they could not get a new profession once cured.

Some users were complaining that Ender Dragon Fireballs damaged to much. Thus Mojang adjusted the destruction from it in the Nether Update.

For instance, hopper minecart now drops a minecart with a hopper when shot by a ranged weapon.

Multiple Honey Blocks can finally be crafted in two by two grid. Users had to use a workbench.