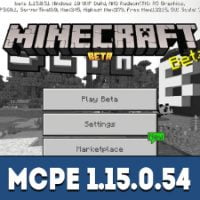 Mojang Studios keeps releasing updates without anything new but bug fixes. These versions are significant to the game’s development cycle.

It means this sandbox survival will work and feel way better in Minecraft PE 1.15.0.54 than it did before.

Moreover, the most vicious and meddlesome crashes are out of the game since devs have solved them.

When it comes to unexpected game quits, some of them managed to occur when a player was using the Character Creator.

Also, you could lose your saved progress when an aggressive slime would forget its target. Minecraft PE 1.15.0.54 is to fix those issues.

However, there is something suitable for mod creators as well.

When modifying specific JSON files, a crash could occur, which would lead to a loss of progress.

Moreover, Xbox One users may have encountered an issue when resuming to play. All in all, those problems are no longer a thing in MCPE 1.15.0.54.

A few years ago, an ocean monument was introduced to the game. However, sometimes it may have generated wrongly.

Its interior was corrupted and seldom incomplete. Thereby several users were unable to get the full experience from this place.

Luckily for them and other adventurers, this nasty issue was solved in Minecraft PE 1.15.0.54. It means your journeys won’t ever be interrupted.

Furthermore, some strongholds, which contain an End portal, could spawn without a library and the portal itself.

As a result, users couldn’t finish their mission, and the evil Ender Dragon won. This unfairness and injustice is no longer a thing in MCPE 1.15.0.54.

By the way, iron golems’ strolling animation has been fixed as well. It didn’t look good at all.

Plus, polar bears, ocelots, and a few other mobs can once again be leashed. It eases transportation significantly.