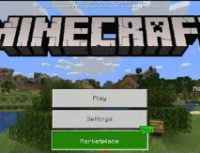 Download Minecraft PE 1.15.0.53 Nether Update for free on Android: tons of parity improvements, bug fixes, and new content is now in the game.

Well, Mojang has announced that Minecraft Bedrock Edition will soon be entirely the same as the Java Edition.

According to the devs, their goal is to make sure everybody has the same experience.

Thus there is a lot of changes regarding some of the game’s aspects. For example, an observer block no longer detects a signal immediately after being placed in Minecraft PE 1.15.0.53?

First things first: the performance has been improved once again. It means that even the weakest and the most flaccid phones will be capable of running MCPE 1.15.0.53 swimmingly.

Furthermore, the most common crash causes have been finally fixed too. By the way, keyframe animations are optimized as well. Moreover, lingering and splash potions eventually work correctly.

They define their boundaries the way they should in Minecraft PE 1.15.0.53. The same thing happened to cakes: their textures were a bit incorrect lately.

There are no new features of the Nether Update yet, but you can find some exciting changes. For instance, creatures regularly take damage when spawning on magma blocks.

Additionally, there was a funny error lately. It turns out some mobs like zombies when holding a piece of armor on their hands wear them at the same time in MCPE 1.15.0.53.

Luckily, this ridiculous mistake has been successfully fixed.

As it’s been said before, Mojang is trying to equal both versions of the game. Users can already see changes: the Wither does not destroy obsidian blocks while spawning.

The most fascinating shift is the 3D-shaped dropped items. Now it looks pretty and a bit more real. Minecraft PE 1.15.0.53 has also let the flowers be removed from the pods by simply clicking on them.

Beside, boats and entities currently take damage if spawn on a cactus.