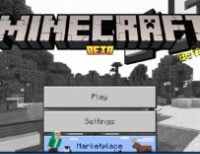 Download Minecraft PE 1.14.30.51 Buzzy Bees for free on Android: new list of improvements and enhancements of the gaming experience.

Mojang Studios promises to make the game the game better over and over again. This time, for instance, they’ve come up with some remarkable ideas on how to ameliorate Minecraft PE 1.14.30.51.

First of all, developers did their best to get rid of pestiferous crashes that could cause a loss of progress.

Unfortunately, they are unstoppable: devs are fixing them, but every time they appear once again.

Bees’ arrival was quite unexpecting at first: Mojang Studios said no word about it. Now, players can play with the very pollen-collectors of the Earth in MCPE 1.14.30.51.

They often live near the various flowers and trees: their nests are always under them. No more than three bees can enter a hive or a nest at the same time.

On the other hand, auto-jump, which was quite annoying for some users, no longer triggers when walking through doors. Besides, when a player crafts a honey block, he receives the right amount of empty bottles in return.

As you might already know, most of the upcoming versions are going to be only about some minor improvements since all features of the Buzzy Bees Update have already been implemented into the game.

For example, split-screens once again work correctly on most devices in MCPE 1.14.30.51, meaning you can play with your friends and not to worry about those technical issues.

All in all, the game’s becoming better and more advanced with every single update thanks to the devs.

When it comes to mobs, iron golems have finally got a little change for the first time in their entire existence. They crack, meaning the more damaged they are, the more degraded they look.

This little addition is excellent to show the depth of each mob’s behavior in Minecraft PE 1.14.30.51.