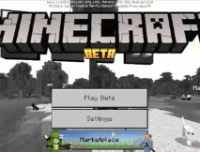 Download Minecraft PE 1.14.25.1 Buzzy Bees for free on Android: this version is to bring stability and eventually smooth and enjoyable gameplay.

The developers have been working quite hard to deliver the best possible outcome for the players of all platforms. Minecraft Bedrock Edition 1.14.25.1 unites approximately a dozen of different platforms.

Mojang Studios tries to make playing the game on all of them unique but equal at the same time. That’s why players might expect to see some minor changes in the overall game’s aspects.

For instance, transparent blocks will no longer let numerous creatures to spawn inside them. You could come across a creeper who is stuck in a window.

Zombies in glass blocks were quite an ordinary thing in the past. Luckily, now, it is about to change in MCPE 1.14.25.1.

Users who practice with command blocks or work with simple directions in the chat will be happy thanks to Minecraft PE 1.14.25.1. Mojang Studios announced some changes to come in that beta version.

First of all, beehives and nests now have proper textures of their front side when placed by the /setblock charge. That insignificant issue could prevent complex mechanisms from working.

So, players fond of commands will surely like this update since there are other changes besides those.

By the way, some players reported wolves did not breed for some reason. It turns out that tamed dogs could not move towards each other for a technical reason.

Fortunately, Mojang Studios made the puppies appear possible once again in Minecraft PE 1.14.25.1. On the other hand, parrots now sit on the player’s shoulders even when the world is reloaded.

There are also some fixes of the split-screen and other game mechanics.