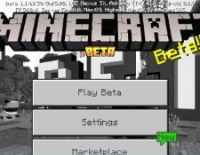 Well, Mojang Studios have revealed that the Buzzy Bees update is about to release in a few weeks, meaning most of the upcoming betas will probably be filled with bug fixing changes.

Nonetheless, there is a lot to see in those updates. For example, you can find really significant changes in Minecraft PE 1.14.2.50. First of all, crashes are no longer a thing in the game.

They have been quite annoying lately. Users were losing their map progress, which resulted in a disastrous disappointment.

Additionally, there are some other improvements besides the pesky crashes. For instance, classic skins are now saving changes when a player reloads the game.

It is called Character Creator. Its the most exciting feature is the way you adjust your skin.

It appears you are now able to reform all parts of your body separately and the way you’d have never imagined. Choose a hat or anything else for your head.

Additionally, Minecraft PE 1.14.2.50 users get to pick up shirts, skirts, socks, shoesм, or any other apparel.
All in all, there is now a lot to experiment with in the skin editor.

Besides, the very gaming experience has ameliorated as well. For example, any projectiles can now be shot through the miserable gab between honey blocks.

Another change is related to those sticky construction materials too. Tridents do not bounce on the honey block once thrown in MCPE 1.14.2.50.

The same thing happened to all mobs and the players: you do not spring away from that block once it’s moved.

This vexing issue has been ruining numerous contraptions in Minecraft PE 1.14.2.50.

The Buzzy Bees Update was obviously about some flying insects that collect pollen from flowers. In MCPE 1.14.2.50, however, they’ve changed.

They no longer go in and out of the nest or hive, which is currently on fire.

So, technically, there is a lot to see in this tiny version as it might seem.