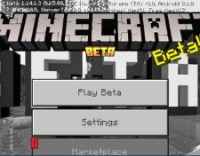 Download Minecraft PE 1.14.1.2 Buzzy Bees for free on Android: bees have come to the game and brung honey with.

Although the Buzzy Bees update has been released, there is a lot to do for devs. Fixing bugs has always been their priority, and this time they did all they could to make MCPE 1.14.1.2 even better.

Did you know this is the first time since 1.2.13 version when Mojang Studios release betas for a minor update?

The changes are not that big, but they sure do change the gameplay. Besides, the game’s performance has got better as well. It means more smartphones will get to launch the game correctly.

As it’s evident from the title, this update is all about bees. They are adorable since they gather pollen to make some honey, which you can collect in Minecraft PE 1.14.1.2.

Honey can be used as a beverage to mute your hunger or as a building material. You see, there is a honey block, which is normally used in constructing things.

On the other hand, there are honeycombs. These cannot be eaten, but at least you can use them to make a honeycomb block, which is perhaps the most pretty-looking thing in the Buzzy Bees update.

Not too much changed, but there is still a lot to see in Minecraft PE 1.14.1.2. For example, bees now die when attack. It is exactly how things work in real life.

Additionally, some players complained about their invisible hands from a first-person perspective. Luckily for them, the problem has been solved, and you do not need to worry about it.

By the way, honey blocks have been enhanced as well. It appears that they were sticking to slime blocks. The community asked Mojang Studios to change.

Generally, there is a lot to see in this update, which brings hope for something exciting.