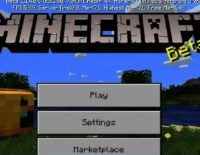 Download Minecraft PE 1.14.0.6 Buzzy Bees for free on Android: a lot of fixes, numerous changes, and much more awaits you in the game.

Well, the release of the Buzzy Bees Update is getting closer and closer with each day. Minecraft PE 1.14.0.6 is another step in that direction.

It might not add anything exciting, but at least some bug fixes are quite handy. For example, some pestilent crashes reasons have been resolved.

Finally, good people of MCPE 1.14.0.6 will rest since they don’t have to worry about the progress loss.

Usually, these unexpected meddlesome quits led the worlds to break.

Throwing lingering potions could cause one. The engine wasn’t capable of showing that many particles and got out of order. Luckily, no longer will we encounter that problem.

As you know, bees are the main point of this update. Generally, they are quite smart: bees do not attack you even if you’re too close to them.

However, these hardworking pollen-harvesters couldn’t get through open doors, which made them reasonably silly. Mojang Studios analyzed feedback the community sent and repaired it in Minecraft PE 1.14.0.6.

Besides, now you can see the very pollen on their bodies when they transfer it from a flower to a nest or a hive.

One of the memorable parts of the Buzzy Bees update is its brand new skin editor. It turns out devs did some work and reached the next level in Skin Customization.

So to speak, MCPE 1.14.0.6 users will lastly experience the taste of a good-working adjusting system. You see, you can now change any part of your body effortlessly and independently.

It means your skins finally become glamorous and delightful to look at. A player doesn’t have to a canny fox to understand how it works. However, the majority of skins are blocked, and you have to buy them.

Nevertheless, Minecraft PE 1.14.0.6 has made the release of the cutest update so far just closer to its final destination.