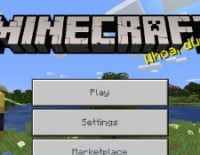 There is a lot to know about this handy update, which may have repaired the game’s most broken aspects. There is a new Character Creator. It allows you to adjust your character anyhow you wish.

However, you’ll have to pay real money to get the most remarkable outfits. By the way, this feature actually adds layers system. It means each body part can now be customized independently in Minecraft PE 1.14.0.52.

Generally, the Buzzy Bees update adds honey and everything anyhow related to it. Bees are now in the game too. Mojang Studios announced their arrival after they revealed their teamwork with WWF.

There is also a challenge to collect as much honey as you can, so devs donate pretty big numbers to World Wildlife Fund. MCPE 1.14.0.52 lets you help bees to fight against climate change.

Honey-harvesting is a rather simple task, but you shouldn’t rush yourself. You cannot collect either honey or honeycombs if there is no campfire under the nest or hive.

If you dare to ruin their house, they’ll switch the neutral style of living to the hostile in Minecraft PE 1.14.0.52.

Whereas there is so much that changed Mojang Studios also tried their best to fix most of the problems. For example, some Character Creator items were shown inappropriately.

Furthermore, a lot of textures were getting damaged when you disabled texture packs. Besides, some bees wouldn’t react if their kids got harmed. But it’s no longer a thing.

Another excellent example of extraordinary hard work is the game’s performance. Mojang Studios put a lot of effort to make players experience smooth and pleasant.

Moreover, as it’s stated in the changelog, it is now less laggy in crowded areas.