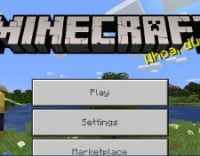 The best part of that minor update is the fixes it brought to the game. Did you know there are fewer bugs and lags now in MCPE 1.14.0.51?

Luckily, devs weren’t lounging. By the way, some changes will definitely change the game’s future.

For instance, the Character Creator is a new tool for skin customization. It deepens the opportunities you’ve already got.

Users have been able to change their appearance quite easily for a decade now. Minecraft PE 1.14.0.51 players, however, will reinvent it and ameliorate it, so it serves a better goal.

That’s why there are new ways to adjust yourself any style you want.

The most engaging part of all of it is that you can change your bodyparts freely from each other.

Thanks to the independence we’ve got, you can wear a honey-looking arm, a spider leg, zombie face, and other unmixable stuff you’d like to use since nobody is about to stop you un MCPE 1.14.0.51.

Nevertheless, the supply of free limb costumes is reasonably scarce. But players can fix it directly buying a new piece of clothing. Simple as that.

Another appealing factor of the game is its a bit changed interface. For example, now you undoubtedly will lose no world’s picture. Some players reported they could recognize their worlds since there was no image.

Additionally, several items could take too much space in the Marketplace, but it’s been fixed in Minecraft PE 1.14.0.51.

By the way, good old bees evolved too. They are smarter, faster, more reasonable, and all of that. For example, when the pollen has been collected, it will be transferred right to the hive or nest.

Furthermore, annoying crashes are in abyss now, so we won’t hear about them ever again.