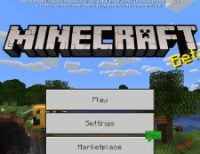 Download Minecraft PE 1.14.0.1 Buzzy Bees for free on Android: bee nest and hives, new insects, and lots of new features are now in the game.

The Buzzy Bees Update was quite unexpected since Mojang Studios did not announce anything before releasing its first beta-version. Players had literally no clue what was coming.

Minecraft PE 1.14.0.1 is the new beginning for something tremendous. Users will become bee farmers considering their new ability to harvest honey.

According to Agnes Larsson, the main point of why these funny creatures have been added to the game is Mojang’s goal to inform Minecraft PE 1.14.0.1 players about the possible extinction of this insect family.

Bees have only ten heart points in the game and are neutral towards a player. Nonetheless, do not try to kill them or destroy their nests — they will fight back.

You can find bees flying around the flowers on plains and near trees in flower woods. They love flowers since they collect pollen, which is a necessary part of their life.

Therefore flowers are what they eat. Use them for breeding bees in MCPE 1.14.0.1.

There are some bee-related construction blocks as well. For example, a bee nest is a naturally generated blocks, which can be found under trees.

If destroyed by a player, all its bees will start attacking the invader. To collect honey in Minecraft PE 1.14.0.1, all you need to do is to place a campfire underneath it.

Now you can get honey with empty bottles and honeycombs with shears.

On the other hand, a beehive is an artificially created analog of a bee nest. You can craft it using planks and honeycombs. Afterward, you gotta attract some bees with flowers to live in it in MCPE 1.14.0.1.

Some changes have occurred to happen in this update. It turns out dispensers can now fill bottles with water and honey. Additionally, they can collect honeycombs with shear placed in it.

By the way, more animals can now be attached to the lead. It’s an excellent addition to all farmers out there in Minecraft PE 1.14.0.1.

The menu screen has already changed to fit the update’s theme.