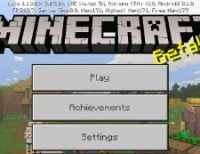 Mojang Studios is doing its best to get the best possible experience on all platforms. For example, they added new blocks to make the building process even more enjoyable.

Besides, there are even several technical blocks that cannot be obtained in Survival but only in Creative. These are used by map creators in Minecraft PE 1.13.0.9.

This beta version has also brought tons of other exciting features like brand new items and even creatures. Generally, this tiny update contributed in a significant way to the game’s development.

There are three constructing options to build with. First of all, it’s a dead coral. You can get it by drying out some space. Since corals cannot live without water, they’ll perish and turn into dead one in MCPE 1.13.0.9.

Obviously, they have light gray texture, which represents its dryness. Map creators can use it in many ways. By the way, these imaginative people have also got Light Blocks.

As it’s evident by its title, this block is entirely invisible and only emits light. You cannot get in Survival since it is used to highlight something in the Minecraft PE 1.13.0.9 maps.

Developers have also tried to implement new flowers. For instance, you can find wither roses once some living being is attacked by the Wither.

You can use to make a black dye. Plus, if you walk past it, it damages you.

The famous note blocks have a miserable but essential fix: there are eleven new sounds in MCPE 1.13.0.9. The bone block sounds like a xylophone, gold block like a bell, and clay sounds like a flute.

These jars will influence the note blocks’ future remarkably. Moreover, a suspicious stew now spawns in chests around the world.

On the other hand, the brown mooshroom can only be found when lightning strikes a red mooshroom in Minecraft PE 1.13.0.9.

They give already-mentioned stew once milked.