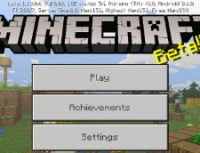 Download Minecraft PE 1.13.0.6 Village & Pillage for free on Android: new creatures like foxes, tons of improvements, and other stuff is in the game.

Mojang Studios continues improving the Village & Pillage Update. For example, this time, there are fewer possible crashes, which is excellent since they could end up with progress loss.

One of the most widely spread issues was related to the void block. It is a new block, which is used by a structure block. It replaces all empty blocks when some certain area is copied in MCPE 1.13.0.6.

The void block is invisible, but if to look at the zone through the structure block, you can see their borders.

Besides, some Android devices could not launch the game successfully since they were too weak to perform that action. Luckily, Mojang Studios made it possible in Minecraft PE 1.13.0.6.

First of all, there are foxes now in the game, meaning taigas have got its another unique mob. Finally, these timid creatures can be found under pines in MCPE 1.13.0.6.

They do not like humans. Their relation to a player may be described as fear. Foxes will always swiftly run away from you. Nonetheless, you can befriend them quite easily.

Simply feed them wild berries. Fortunately, you don’t have to go far since they grow in snow biomes in Minecraft PE 1.13.0.6. Once fed, they’ll bring a little cub fox into the world.

This child will be the one who is not afraid of you.

Some players love or have to teleport in between different far locations. However, it wasn’t quite possible lately. Users could end up in walls and get turned around in MCPE 1.13.0.6.

Besides, some other problems have been resolved as well. For instance, armor stands now display arrows correctly on their hands. Plus, helmets can once again be placed on them.

Generally, this update is all about bug fixes and minor improvements, making the game better.