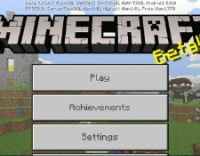 For example, when applying a resource pack to the Realm world, the game no longer freezes. It could end up with the world loss. Luckily, you won’t encounter that pesky bug in Minecraft PE 1.13.0.5.

Besides, several users could not succeed even in launching the game itself.

It would unexpectedly quit without a point.

Additionally, developers have done everything they could to increase the amount of Frames Per Second or FPS in MCPE 1.13.0.5. There’s also been an interface bug.

Some Marketplace products were literally on each other, which led to an overlapped information. Users were not able to understand what was written there.

Moreover, Mojang Studios made some VR tweaks in the Village & Pillage Update. VR-helmet is all you need for an outstanding virtual reality experience in Minecraft PE 1.13.0.5.

By the way, players can push TNT entities no more, which means if it’s lit, it’ll be there. You should be beware of that since it may lead to an explosion at home.

Fortunately, TNT does not break anything underwater. Another hideous issue was related to the recipe book. It turns out it did not show armor, weapon, and tool recipes.

MCPE 1.13.0.5 solves this problem as well as makes mobs drop only damaged items. Users could get a fully repaired shovel.

Another little addition is that marvelous dolphins now follow the players on boats. Try giving them a fish, and they’ll lead you to a buried treasure in Minecraft PE 1.13.0.5.

On the other hand, the End gateway does not spawn on the central obsidian platform anymore.