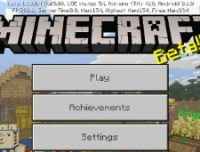 Mojang Studios has been working hard on bringing stability to the game. Apparently, there’ve been numerous crash issues and a large number of other problems.

Minecraft PE 1.13.0.4 is about to fix them all. For example, the game could unexpectedly quit when a player is to reach the world spawn. The same may have happened when blocking a projectile with a shield.

Furthermore, developers have fixed the split-screen problem that could occur on many devices. It was somewhat related to the game’s performance.

Users could experience FPS drop quite often. Luckily, it is no longer a thing in MCPE 1.13.0.4.

Players have been able to clone Nether portals for a long time now, but they’ve been facing a problem. Sometimes these clones couldn’t connect correctly once cloned.

Mojang Studios has taken this seriously, and now portals are working fine in Minecraft PE 1.13.0.4. Besides, some players couldn’t join their friends’ world after the invitation.

The game would crash, and so beloved multiplayer experience would ruin. The /clear button works ideally once again. It wasn’t able to delete already damaged items in MCPE 1.13.0.4.

Furthermore, there are some armor stand improvements. For instance, these things display arrows correctly when holding it. Moreover, armor stands can once again wear helmets.

By the way, ordinary villagers are finally able to sleep in the low ceiling house. Additionally, jumpy dolphins leap and plunge properly in Minecraft PE 1.13.0.4.

Meanwhile, zombies no longer get stuck in doorways, and parrots fly as perfect as they should. On the other hand, there are some graphical enhancements.