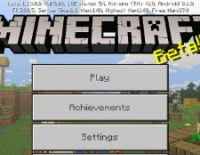 For example, Minecraft PE 1.13.0.2 Mojang Studios has got rid of numerous crash cases. They could appear out of nowhere. You could cease your multiplayer session, and it would quit.

Another unexpected game termination reason was when an ocean monument would load. All of it could cause progress loss, which is one of the most disappointing things in the game.

Luckily, the majority of these crash issues have been solved in MCPE 1.13.0.2.

Minecraft PE 1.13.0.2 has got one of the most significant innovations of addon making ever. Creators can finally devise whole new blocks and items instead of replacing old ones.

This feature allows creativity to thrive, meaning ordinary players can expect an absolutely new level of possibilities. Additionally, there’s an option to turn off the prompt you see in the chat after joining a world.

By the way, the game’s performance has been massively reformed in MCPE 1.13.0.2. It turns out flying on elytra in the End dimension could result in a drastic FPS drop.

Mojang Studios knew about the problem and successfully nailed in fixing it.

Minecraft PE 1.13.0.2 changed the game in many ways. For example, recently added foxes no longer run away from sneaking players. They now understand there’s nothing to be aware of.

Besides, foxes follow players with food no more. You can tempt them only by holding wild berries on your hand. Furthermore, some villagers finally get to their jobs correctly.

Several workers couldn’t find their way to the destination. When it comes to blocks, users are able to craft TNT out of red sand as well in MCPE 1.13.0.2.

All in all, these additions to the main game are making it better over and over again.