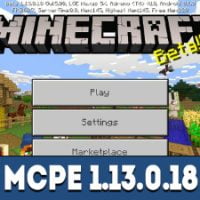 Download Minecraft PE 1.13.0.18 Village & Pillage for free on Android: there are many bug fixes, gameplay changes, and user interface updates.

The majority of MCPE 1.13.0.18 changes are related to the game’s performance since nobody would appreciate new features if they are lagging.

That’s why Mojang Studios took it seriously this time and promised to fix most of the game’s issues. For example, the “Beam me up” achievement can once again be unlocked.

You need to travel more than one hundred blocks with one ender pearl shot in Minecraft PE 1.13.0.18.

Earlier, there has been a ridiculous bug with entity mounting. Some Creative players were thrown to the skies once dismounted. Now, there’s no need to be afraid of heights in MCPE 1.13.0.18.

By the way, for another inexplicable reason, zombies could not spawn in caves even if there was no light.

Luckily, devs have fixed it. Besides, llama’s carpets once again appear on the inventory screen.

Another meddlesome issue was related to the new type of ammunition added in the Village & Pillage Update in Minecraft PE 1.13.0.18.

Moreover, the famous Frost Walker shoes can freeze water again. They didn’t work before for some reason. The scariest bug you could come across to was about the broken blocks’ shadows.

Even being mined by a player didn’t stop them from shadow dropping.

When it comes to the user interface, players can expect some improvements to some of the buttons on the main menu of Minecraft PE 1.13.0.18.

Devs have recalibrated them.