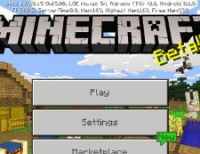 Mojang Studios keeps changing the game, making it better and more gorgeous every time they release a new version. Usually, most of the game’s aspects are changing.

For example, new villagers are now selling suspicious stews as a part of the Village & Pillage Update. By the way, all the settlement inhabitants have some specific jobs now.

Farmers are selling crops and some types of food in Minecraft PE 1.13.0.15.

Developers have been working really hard to bring an absolutely astonishing way of customizing yourself to MCPE 1.13.0.15. It turns out the Character Creator changes the usual patterns we used to.

Players are currently able to determine and freely adjust every single part of their bodies independently. We had to change the skin in total earlier — however, now we are no longer bound to do so.

It means the creativity may flow as much as it wants in Minecraft PE 1.13.0.15. Players can wear fancy hats, pumpkin-looking sleeves, and blackjack pants.

Nonetheless, only the part of it is available for free — you’ll have to go shopping if you want to look pretty.

First of all, Mojang Studios fixes its many mistakes. Besides, the notorious crashes are gone for good as well. On the other hand, devs moved the “Achievements” button to the “Profile” screen.

Evidently, the game’s performance has ameliorated. This addition is crucial for some players since they’re having lots of issues on their low-performance smartphones.

Moreover, the pillagers raiding the ravagers are properly sitting when celebrating the successful raid in Minecraft PE 1.13.0.15.