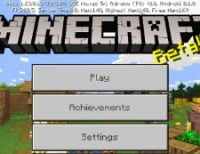 Download Minecraft PE 1.13.0.13 Village & Pillage for free on Android: lots of bug fixes, numerous enhancements, and tons of other content are in the game.

Mojang Studios did lots of work improving game mechanics. For example, Minecraft PE 1.13.0.13 now runs way better than it did. Besides, there are other enhancements like a new rendering engine.

It turns out developers have been secretly working on the Render Dragon. This engine is supposed to let the game feel greater even in the most complicated scenes.

Additionally, it is the needed base to get rid of meddlesome crashes and bugs that usually appear out of nowhere.

By the way, some users are now notified about the screen size they are using.

Developers are still trying to fix the most common errors. As a part of the Village & Pillage Update, settlements have been drastically ameliorated in Minecraft PE 1.13.0.13.

Now, villagers have their own schedules and jobs to attend. However, farmers who obviously trade with crops weren’t able to harvest some.

It was happening because the villagers’ inventories were full. That’s why they didn’t know what to do. Fortunately, this mistake has been taken care of.

On the other hand, turtles and all types of tropical fish try to reach the ocean bottom no more in MCPE 1.13.0.13. At the same time, villagers are hiding way better during the raids.

There are some changes to the user interface as well. The “Feedback” and “Save & Quit” buttons are now appropriately fit in the menu.

By the way, the chances to find the treasure map have lessened once again.

They were remarkably high for some reason.