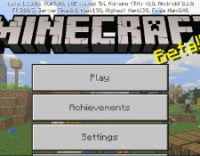 Mojang Studios is still working on the Village and Pillage Update, so Minecraft 1.13.0.1 is all about raids and new settlements. On the other hand, there is new content as well.

For example, users may come across foxes in the taiga biome. These creatures are timid and jittery but still lovely and cute. Besides, lots of bugs have also been fixed.

In its entirety, the game has just become better once again.

Developers added new constructing blocks to build with, so players could have fun in Creative. It appears the new Void block cannot be obtained in Survival.

This is a technical block used by structure blocks in MCPE 1.13.0.1. All empty space copied by that block will be saved as the void block. Thus you cannot use it to build anything.

These blocks are invisible and intangible. Plus, it’s available only with the Experimental Gameplay on.

Foxes are finally roaming the snowy taigas in Minecraft PE 1.13.0.1. These creatures have been elected the game’s community at Minecon Earth 2018 Biome Chooser.

Therefore they are scooting from the player once they see one. Foxes are friendly — even if you attack, they’ll continue ignoring you and bolting away from you in MCPE 1.13.0.1.

Nonetheless, they do hunt chickens, but they are also being preyed by wolves and polar bears. There is that small eco-system in the game now.

Despite the many players’ desire to tame them, you cannot do it in Minecraft PE 1.13.0.1. However, you can stop them from running off you.

Just feed them with berries and let them have a child. This little cub won’t ever be afraid of you. That’s how you make friends with foxes in the game.

In total, there are also some minor interface changes as well as old blocks and mobs enhancements in MCPE 1.13.0.1.