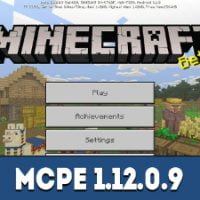 Most of the new stuff added in Minecraft PE 1.12.0.9 was about minor changes, making gaming performance way better than it was. For example, Mojang Studios swears they’ve fixed most crash cases.

Apparently, your game could accidentally quit when loading a roaming skin or breaking a bell.

Besides, users could lose their progress when signing in to their Xbox Live accounts.

However, all of these issues should have been fixed in MCPE 1.12.0.9. Now, your game shouldn’t freeze or stop responding for no reason, meaning you have to worry no more.

One of the most crucial aspects of any game is its performance. Developing a game is one thing, but making it playable is another. It could be perfect, but if it’s laggy, the gaming experience is ruined.

Mojang Studios understood that a long time ago, however, it’s tricky to get rid of all lags that could occur in the game. Nonetheless, they are still trying to do it in Minecraft PE 1.12.0.9.

For example, users reported trashy experience when opening inventory or any container.

The game could just freeze for a moment. Besides, the villagers’ AI had the same problem.

It turns out they could barely find their way to work or back home, not to mention them failing that during raids. Devs solved all these problems in MCPE 1.12.0.9.

There are also some changes to some of the game’s mobs. For instance, iron golems now sway when walking. They look a bit clumsy now, but they should since they are bulky and made of iron.

The Marketplace is currently showing proper pack icons. Users had some trouble with it since it was a little confusing.

All in all, the game has become better with all those bug fixes and neverending tweaks.