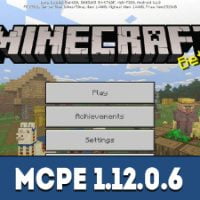 Download Minecraft PE 1.12.0.6 Village & Pillage for free on Android: there are many gameplay improvements and minor changes to the addon making aspect of the game.

Mojang Studios releases a new update, promising it to be more about bug fixes and minor changes to its core mechanics. For example, villages are now less laggy in Minecraft PE 1.12.0.6.

It turns out developers are implementing a new render engine, which is supposedly better than the previous one. It should fix tons of various bugs players usually come across.

Besides, crashes are no longer a thing in MCPE 1.12.0.6. Developers guarantee you won’t encounter accidental quits any time soon. Usually, your game could crash on the loading screen.

It was also quite possible to close the game when throwing eggs and snowballs, shooting flaming arrows, and trading with villagers.

Speaking about improvements, you don’t need to restart your game to apply the custom skin you made up. Apparently, it was just a mistake.

Moreover, players are once again capable of crafting acacia planks.

This warm biomes wood was quite useless until MCPE 1.12.0.6. On the other hand, dyed wool can be used to draw paintings.

Furthermore, the “Iron Belly” achievement can be obtained once again. You need to taste some rotten flesh from zombies to stop your starvation.

The Village & Pillage Update added new cats and villagers to the game. Cats are now roaming the village streets, and villagers are obviously working due to the schedules.

However, they both have one thing in common — new sleeping ability.

Nonetheless, they had problems with it since their head or bodies, in general, were in the wrong position. It made them look creepy. Fortunately, this issue has been solved in Minecraft PE 1.12.0.6.