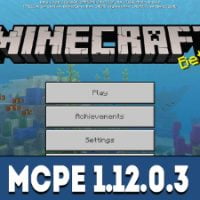 Mojang Studios has been working hard to bring the best possible gaming experience to Minecraft PE 1.12.0.3 players. First of all, they changed the bamboo texture to match Java Edition.

It turns out developers are still trying to even both versions. They want to make the game the same on all platforms. Devs have already managed to merge different consoles into one.

The game’s main menu has changed a bit: the “Store” button is now replaced to “Marketplace.” There are also some improvements for addon creators in Minecraft PE 1.12.0.3.

For example, there might be tons of zombies at night or creepers spawning during the daytime. All of it achievable in MCPE 1.12.0.3.

Besides, recipe JSON files are in the packs as well.

Customizable recipes are a thing in the game. It means you can add your own templates to get some kind of a block or a tool.

Many users reported about player’s flipped hands and legs, which wasn’t a big problem since you could still do anything you wanted. However, it’s been solved in Minecraft PE 1.12.0.3.

By the way, tamed tuxedo cats have proper textures. At the same time, witches no longer jump when attacking. It was ridiculous to look at them struggling.

Nonetheless, it doesn’t mean MCPE 1.12.0.3 has become easier to play. For instance, vindicators and zombies break wooden doors way faster than they used to.

It means you have less time to run away or to prepare yourself for a fight.