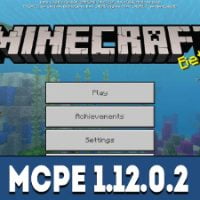 Download Minecraft PE 1.12.0.2 Village & Pillage for free on Android: lots of changes, a few improvements, and several blocks are in the game now.

First of all, Mojang Studios continues to add features from the Village and Pillage Update. For example, illager captains now drop their flags correctly.

You can identify those quickly by the banners on their backs. If you kill them, you get a “Bad Omen” effect. It is used to start raids in Minecraft PE 1.12.0.2.

Just enter any settlement with the effect on, and the massacre will begin. With that being said, hordes of pillagers wave the village, slaying anyone on their way.

Fortunately for some of the victims, they have iron golems. Those friendly monstrosities are rather robust and eager to stop the invaders in MCPE 1.12.0.2.

All in all, the game has been improved massively.

Mojang Studios are still trying to even both the Java and Bedrock editions of the game. In order to do, they have redesigned the seagrass to match the game’s other version.

On the other hand, command blocks now support autofill. You no longer have to worry about syntax or grammar mistakes in your commands in Minecraft PE 1.12.0.2.

Besides, there’s a delay option you can use in a command block. This suspension is measured in common Redstone ticks.

By the way, the new-found structure block now has an outline when placed on the ground.

Moreover, the brand new barrels added in the Village & Pillage update now have their own Creative inventory section in MCPE 1.12.0.2. Priorly, they were bound to chests.

On the other hand, Mojang Studios have worked on the cartography table and lectern UIs. Also, their GUIs can currently be modified in resource packs.

The most significant addition of Minecraft PE 1.12.0.2 is definitely the /particle command used to spawn chosen bits.

It will chiefly be used by map creators to make the game’s performance even better.