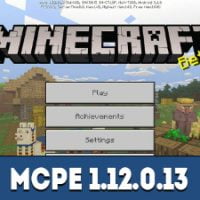 Download Minecraft PE 1.12.0.13 Village & Pillage for free on Android: this update is mostly about some minor changes and miserable gaming experience enhancements.

Mojang Studios is getting closer and closer to the second part of the Village & Pillage Update release. Therefore the majority of all upcoming bug fixing betas will be about problem-solving.

For instance, Minecraft PE 1.12.0.13 improves a few critical aspects that can change the whole gaming experience.

It turns out developers put some work into the game’s performance.

As a result, we can finally launch our beloved sandbox survival game without any issues on cheap and rather weak devices. MCPE 1.12.0.13 optimizes the way the app exploits the given memory.

In order to fix the significant leak of memory use, Mojang Studios had to recode some features of the game. It involves the world’s generation and its appearance.

For example, the application shall load only chunks you are looking at rather the whole territory in general.

However, it doesn’t mean those unseen land pieces won’t update at all in Minecraft PE 1.12.0.13.

Fortunately, the fire will spread across wool or wooden structures, your crops will grow, and sheep will get fleece in the game.

MCPE 1.12.0.13 is also known for an incredible ability to modify and adjust itself. There’re tons of modifications, texture and resource packs, and maps on the Web.

However, to apply them all, you had to use the Global Resources tab, which sometimes could show up inappropriately. That’s exactly what was fixed in this beta version.

Besides, there are fewer lags and, most importantly, crashes. It means you won’t lose your progress in Minecraft PE 1.12.0.13. At least, you’ll do it less frequently.

All in all, Mojang Studios worked hard to deliver the best possible experience and satisfy beloved players.