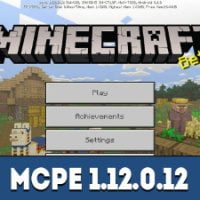 Download Minecraft PE 1.12.0.12 Village & Pillage for free on Android: more minor changes that make the game better and new sounds are now in the game.

Mojang Studios continues to upgrade its sandbox survival game since it’s still laggy and can unexpectedly quit. Players could actually lose progress because of the prior one.

For example, Minecraft PE 1.12.0.12 fixes one of the most meddlesome issues ever. Skin packs show the number of skins included in the kit.

It was a big deal for customers to buy things they didn’t know how much they would have. Luckily, this minor, as it might seem, update solved the problem.

This part of the Village & Pillage Update is quite dull compared to the others.

However, some convenient and necessary tweaks have been made to make the gaming experience enjoyable in MCPE 1.12.0.12.

For instance, one of the most significant changes in that announced release is the whole new trading. Now, villagers are way smarter than they were.

They have their schedules and individual jobs where villagers spend most of their spare time in Minecraft PE 1.12.0.12.

Besides, some users couldn’t comprehend villagers do not want to trade with them since they were silent. Now, they have specific sounds to refuse to deal with a hero.

Furthermore, the complex looking command blocks finally get one of the most anticipated features — autofill. Now, you don’t have to know an entire command in MCPE 1.12.0.12.

You can start typing anything you want, and the game will catch you up immediately.

It’s quite sooting to know you don’t have to learn those complicated pieces of code anymore.

Generally, the Swedish sandbox game has improved dramatically, thanks to Minecraft PE 1.12.0.12.