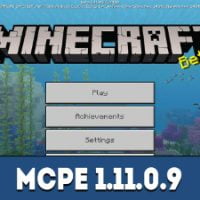 Download Minecraft PE 1.11.0.9 Village & Pillage for free on Android: this update fixes tons of different bugs, making it quite valuable.

Mojang Studios announced the new beta version to improve existing aspects of the game. It turns out now there are fewer crashes a higher FPS rate in Minecraft PE 1.11.0.9.

For example, a crash could occur when a player would leave the world when somebody enters it. Besides, the “Bad Omen” effect could cause an unexpected error as well.

Although it’s been fixed in MCPE 1.11.0.9, crashes are unstoppable and will continue appearing in the game.

There is another Text to Speech related solution that has been found in Minecraft PE 1.11.0.9. It appears the speaker did not read the modal popups correctly or at all.

This accessibility feature plays an important role for the visually impaired. Now, it works quite fine thanks to the in-time fix.

On the other hand, TNT now knocks back the healing players. Typically, you’d got nothing from the explosion if you are drinking the health potion.

However, it changes in MCPE 1.11.0.9. Besides, there is a knockback underwater as well, although it doesn’t hurt you.

The Update Aquatic introduced many new features to the game. For instance, there were new biomes, drowned zombies, and blocks like coral.

Nevertheless, a seagrass could actually break blocks when it grew. It wasn’t normal, so developers had to fix it in Minecraft PE 1.11.0.9.

Now it’s no longer that tough to break down blocks on top of it. However, there are also some graphical changes.

For example, the tripwire texture is different in MCPE 1.11.0.9. Plus, the /clear command no longer gives out errors when something minor goes wrong.

The most crucial repairment of this update is related to the mobs. It turns out any creature was not able to spawn in icy biomes.

It meant no loot or danger in those areas, which are survival’s essential elements. For the adventurers’ sake, this problem has been solved in Minecraft PE 1.11.0.9.