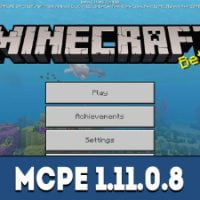 Download Minecraft PE 1.11.0.8 Village & Pillage for free on Android: it is mostly about bug fixes, improvements, and enhancements.

Mojang Studios continues to add new features alongside the general improvements and bug fixing. Likewise, the game’s performance has been majorly updated.

However, the main focus is obviously about the raiders called pillagers and their attacks known as raids.

Those have been fixed as well. Like, the boss bar, which appears during raids as well, is now officially in the game.

All in all, despite the bug fixes theme of this beta version, Mojang Studios put a lot of work in MCPE 1.11.0.8.

Most of the upcoming updates are minor since all the significant changes and features are already in the game.

Minecraft PE 1.11.0.8 doesn’t add anything new, but it is as important as many others. It turns out developers fixed loads of bugs.

One of them was concerning the Save & Quit button. Players couldn’t exit the game — the game would just freeze once the pin is pressed.

Nonetheless, Bedrock Dedicated Servers and skin overviewing had some problems too. All of those issues are solved thanks to MCPE 1.11.0.8.

Moreover, if a player enters the world with an active raid going on, the boss bar won’t disappear, so the “Hero of the Village” effect can still be obtained.

According to Mojang Studios, they’ve also worked on different creatures. For example, skeleton horses can once again be mounted in Minecraft PE 1.11.0.8.

However, villagers can now visit the village outskirts and don’t be frustrated.

Usually, they would show disappointed particles since it was too far from the center.

By the way, the End portal blocks no longer drop as items, meaning you can’t pick them up and build something out of it in MCPE 1.11.0.8.