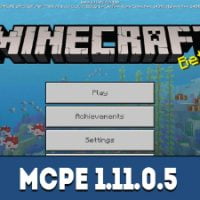 Download Minecraft PE 1.11.0.5 Village & Pillage for free on Android: many changes and minor improvements, making the raids way better than they were.

Developers from Mojang Studios worked quite hard, implementing the game’s essential elements and bettering features of the latest update.

For example, the Text to Speech option now reads literally everything on the screen and all in-game notification in Minecraft PE 1.11.0.5.

However, villagers have got their trading system updated.

First of all, all salesmen have their own job, which is determined by their houses’ functioning block. Like, smiths obviously have smithing tables, and fletchers the fletching workbench.

Secondly, sellers possess levels of trades in MCPE 1.11.0.5. The higher their level, the more stuff you can buy or sell to them. It means more arrangements will be made in the game now.

However, each villager gives away and takes only the stuff it has and needs. So, you cannot buy limitless amounts of potions from the clerks in Minecraft PE 1.11.0.5.

They have to refill their stocks and to do so, they need to visit their workplace and labor a bit.

Village & Pillage’s other major element is the attack pillagers are making. You can summon the invasion if you kill the pillager leader and enter any settlement.

Afterward, armies of those nasty guys will fill the streets fighting anyone. Mojang Studios added new effects to this event as well.

Like, if you successfully protect the defenseless inhabitants, you obtain the “Hero of the Village” force in Minecraft PE 1.11.0.5.

On the other hand, if you fail to protect them, a user would get the “Bad Omen” status once again. It means the raids would keep up happening until victory.

Furthermore, Mojang Studios continues to enhance the game’s textures. It turns out the Texture Update is nigh.

All in all, the game looks way fancier than it did.