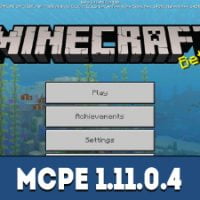 Download Minecraft PE 1.11.0.4 Village & Pillage for free on Android: there are tons of minor improvements and little additions making the game more unique.

Mojang Studios keeps adding new stuff to the game. Now, the trading system has been redone entirely. It turns out villagers currently work a bit differently.

However, vindicators and pillagers have some enhancements as well. Like, they drop loot during raids in Minecraft PE 1.11.0.4.

Priorly, players were smashing them in large quantities but were getting nothing out of them. Thankfully, it’s been fixed.

First of all, every time you join any world in the game, you see a message to open the chat. So, you have new notifications in MCPE 1.11.0.4.

Moreover, epic and ominous raid horn is now heard by all player in the dimension. It signals the beginning of the attack. Nasty pillagers shall fill the village streets cracking and breaking everything.

By the way, once you’ve successfully completed the invasion, you get a “Hero of the Village” effect in Minecraft PE. It allows you to shop at better prices.

Generally, the whole bartering system is revamped in Minecraft PE 1.11.0.4.

As a part of the Village & Pillage Update, Mojang Studios entirely renews the trading. Villagers now have levels, and they sell goods depending on those levels.

Besides, those funky guys have schedules, which they follow in MCPE 1.11.0.4. On the other hand, there is no endless shopping any longer.

Traders will update their wares once they’ve done some work at their working stations. Fishermen work at barrels, alchemists at brewing stands, and fletchers near the fletching table.

By the way, you can determine their job by placing or breaking those workbenches in Minecraft PE 1.11.0.4.

Generally, this new buying-selling policy brings the needed depth to the scarce looking elements of the game.

Furthermore, skin packs now sync between Bedrock devices in MCPE 1.11.0.4, so you don’t have to buy them one more time.