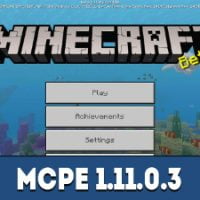 Mojang Studios continues to add new stuff from the latest Village and Pillage update. Improved raids, new commands, and changes to the blocks are now in Minecraft 1.11.0.3.

For example, fletching tables, smithing stands, and sweet berry bushes are no longer exclusive through the Experimental gameplay. It means you can play with them freely.

The majority of aspects have been enhanced for the players’ sakes in MCPE 1.11.0.3.

Developers have solemnly announced the Village & Pillage renewal at Minecon 2018, where players had no idea what they were missing. It turns out Mojang Studios has been secretly working on dozens of new blocks.

Minecraft PE 1.11.0.3 receives some of them. For instance, there is a new container in the game — a barrel. You can store things in there, but villagers use it to become a fisherman.

Moreover, blast furnaces, smokers, stonecutters, and composters are finally out with their functionality. MCPE 1.11.0.3 has also brought working abilities to cartography tables with grindstones.

Now, users have so many different stuff to play and experiment with, meaning you won’t get bored anytime soon.

By the way, since raiders attack is a thing now in the game, devs had to add the boss bar in Minecraft PE 1.11.0.3. Although it’s just a placeholder, it already can show you different stats.

Another feature of MCPE 1.11.0.3 is the /mobevent command. It either disables or enable events such as wandering trader’s arrival, raids, and pillager patrols.

On the other hand, splash water bottles are used to extinguish campfires.

Furthermore, hoppers can now transfer food to the composters.

Players use these blocks when they need some bonemeal in Minecraft PE 1.11.0.3. By trashing some food out, you can get one piece of it.