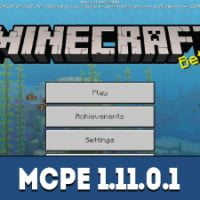 Download Minecraft PE 1.11.0.1 Village & Pillage for free on Android: loads of new blocks, raids, and effects are on the game.

It means users can now experience something genuinely epic like protecting a village from an attack of nasty ravagers.

On the other hand, there are a plethora of various marvelous blocks, meaning you can now construct anything that comes to your mind in MCPE 1.11.0.1.

All in all, the sandbox survival game has just become way more exciting to experience.

Minecraft PE 1.11.0.1 added another intelligent race that is now competing with villagers. Pillagers are always angry at players, golems, and citizens.

Their leader is the Illager Captain. You can identify him quickly because of the banner on his back. Its main goal is to give the “Bad Omen” effect to the player.

Once you’ve killed this pesky creature, you shouldn’t enter any town since it would start a raid in MCPE 1.11.0.1.

Besides, you can find those pillagers in patrols all around the world. Obviously, you cannot meet them in the Nether or in the End.

Nevertheless, the most engaging thing about Minecraft PE 1.11.0.1 is raids. With the “Bad Omen” effect on, enter the village and start the attack.

Evidently, you’ll have to fight the raiders off if you want to become the “Hero of the Village.”

It is the name of the status you can get to have villagers sell you stuff with promotions.

Raids happen in waves. With each one to come, more raiders arrive to assault the settlement in MCPE 1.11.0.1. It’s only available through Experimental Gameplay, so turn it on.

Another fascinating thing about the Village & Pillage Update is the new blocks. Yet they have no functionality, these have the potential to change the game dramatically.

However, some of these blocks can already do stuff.

Like, barrels can contain things, and bell can be rung to warn the village about the attack in Minecraft PE 1.11.0.1.